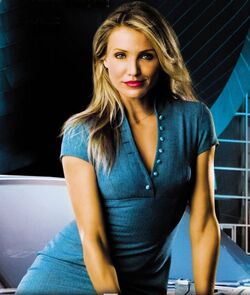 Lenore "Casey" Case, played by Cameron Diaz, is Britt Reid's sexy but disgruntled new secretary who unknowingly becomes the mastermind for the whole Green Hornet plan in The Green Hornet (2011).

In the Radio series, Lenore Case was played by Leonore Jewell Allman.

In the television series, Lenore Case was played by Wende Wagner.

Lenore uncovers information about the Russian crime boss Benjamin Chudnofsky which proves instrumental in helping the Green Hornet and Kato. At the same time, she is constantly angered of being fought over for her affection by the feuding Britt and Kato which, in the process, temporarily gets her fired from her job before being rehired, but with more stricter requests from her to Reid. She is furthered angered near the end of the movie, when she uncovers the secret identities of Green Hornet and Kato and realizes that she has been inadvertently staging their criminal acts. However, she begrudgingly continues to aid them with their plans, knowing that she is connected to the Green Hornet's crimes.

Cameron Diaz as Lenore Case in the 2011 movie

This article is a stub. You can help Green Hornet Wiki by expanding it.