Kato is Britt Reid's valet and partner in crime-fighting. 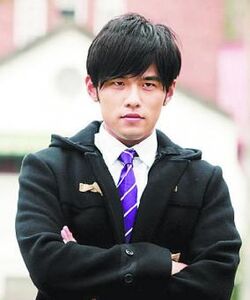 It was due in part to Bruce Lee's portrayal of this character that martial arts became popular in the United States in the 1960s. In this version, he also used green sleeve darts as a ranged attack for situations in which hand-to-hand combat was either impossible or too risky. In the end he had a battle with Robin, while Britt battled Batman, both of which ended in a draw. The impression Lee made at the time is demonstrated by one of the TV series tie-in coloring books produced by Watkins & Strathmore, titled Kato's Revenge - Featuring the Green Hornet. The Green Hornet's success in Hong Kong, where it was popularly known as The Kato Show, led to Lee starring in the feature films that would make him a pop culture icon.[citation needed]

In a crossover episode of the Batman television show, from the same time and companies, entitled "A Piece of The Action"/"Batman's Satisfaction", Kato appeared with the Green Hornet from out of town, to battle Colonel Gumm, who was planning to make counterfeit stamps, authorities believing they wanted a "piece of the action." In the episode, Kato was shown using his fighting skills against foe, while Britt used his gas gun.

The two were saved by Batman and Robin from being turned into life-sized stamps by Colonel Gumm and his henchmen. Afterwards, they crashed an auction where Gumm planned to sell his counterfeit stamp, and after dispatching his henchmen were forced to fight Batman and Robin, who also showed up to stop Gumm. The fight saw Kato facing off against Robin while Britt faced Batman. It ended in a draw when Gumm took Pinky Pinkston hostage, distracting Batman and Robin. The Green Hornet and Kato took the opportunity to escape. After freeing Pinkston and capturing Gumm, Batman notes how strange it was that the Green Hornet battled Gumm, noting that he possibly meant to stop him, though everyone laughs at the idea of the Green Hornet being a hero.

Kato (played by Jay Chou) is the Green Hornet's employee at his publishing company and also becomes his sidekick who chauffeurs Britt during the day while fighting crime by night. Kato is the one who designed and built The Black Beauty.

Britt's arrogance and romantic interests in Lenore Case (whom Kato was in love with as well) constantly annoys and angers Kato that it resulted in a temporally split up and unemployment from Reid. When he is given an opportunity for revenge against Reid for firing him and bullying him during his employment from the film's main antagonist's request to eliminate Britt, Kato forgives Britt after Britt apologizes for his arrogance towards Kato and once again becomes the Green Hornet's partner.

Kato was born in Shanghai, China and worked at a factory at a very young age, where he learned how to build and create gadgets, though his one weakness is that he never learned how to swim. Kato is also a specialist in martial arts and possesses the ability to put someone to sleep by making someone look into his eye pupil, one of the reasons why Britt chooses him to be his partner in (false!) crime. In the older comic series, Kato becomes Britt's partner after Britt saves his life when traveling through the Far East.

Kato will appear in the upcoming animated series in The Green Hornet franchise. She will not, however, be a primary character on the series, this role instead falling to her daughter.[1]